At Epitech Lille, my students have been creating their own English memes. You are welcome to see our memes and vote for your favourite.
What is a meme, you ask...
A meme /miːm/ is a humorous image, video or piece of text that spreads very quickly on the internet, often being changed by different users.

Here is one of the best-known memes on the Internet. It's called "the distracted boyfriend": 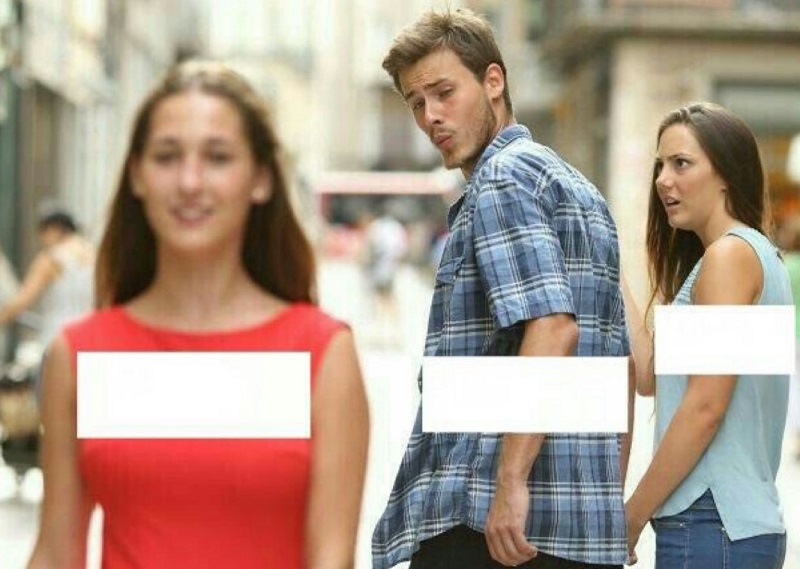 What is the origin of the word meme?
Well, the word meme was first coined in 1976 by British scientist Richard Dawkins, in his bestselling book, The Selfish Gene. The book tackles a discussion of evolutionary principles, and introduces the concept of a meme in connection with the spread of cultural phenomena. In this original sense, meme refers to any unit of cultural information: ideas, behaviour, language etc, which spreads from one person to another in the real world, typically through simple verbal communication. Examples of memes given in the book include musical melodies, catchphrases, fashion and religious beliefs. (Click here if you want to know more about memes.)
Show us your memes!
Here are our top 10 memes! Have a look at them and vote for the one you like best...

(Warning: Epitech is an IT school so a lot of the memes are tech-related, but there are a couple of general ones too. :-)) 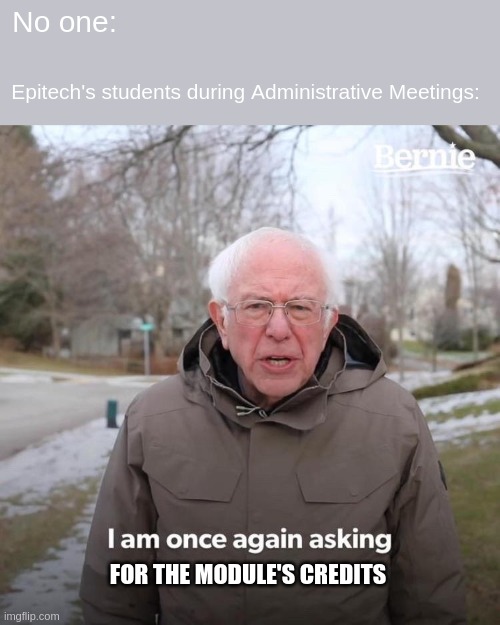 This meme is funny because originally, the guy is asking for financial support, but in the case of Eptiech students, they are asking for their credits each time there is an administrative meeting. Due to the slowness of the Epitech Administration.
They ask again and again until they can see their credits on the intranet. 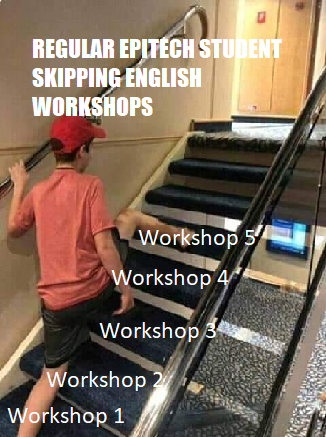 I made this meme because it is funny to see people skip the weekly workshops until the last one.

The template is a kid jumping over the steps of a flight of stairs.

It is relatable because I have some friends that do the exact same as what is described on the meme. 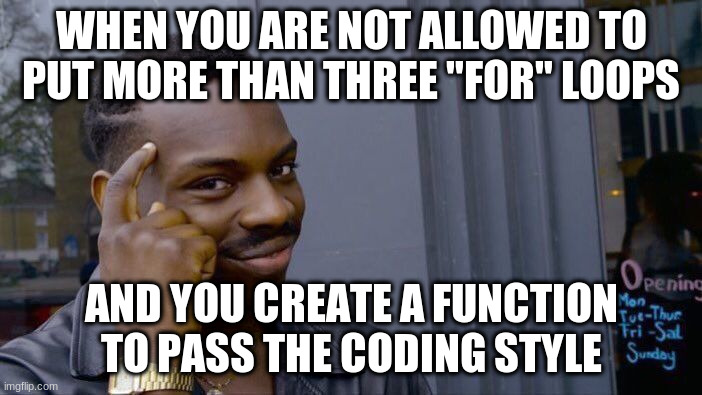 I choose to make this meme because it is easy for a lot of people to relate to this situation.

I think a lot of people have passed coding style several times thanks to this.

Personally I think that coding style can sometimes annoy us but that allows us to understand what we are doing and not to get lost.

Me who wants to travel 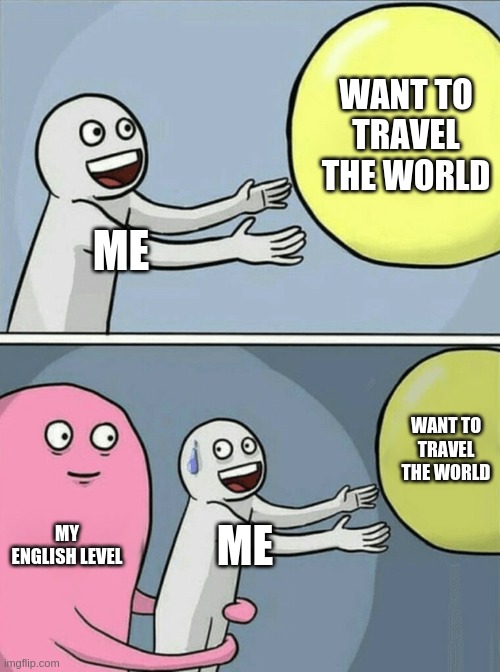 On the first picture, we can see my desire to travel the world.

But on the second picture, my desire is held back by my English level.

When I work on a group project, and I develop a feature I check that everything works
properly. Then I test the functionality with the rest of the project.  Except that I yell at myself for someone else's more or less clean code. And when it doesn't work, it'll crash. 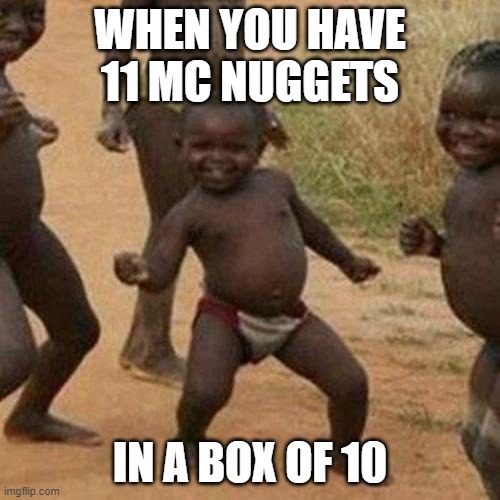 I made this meme for everyone who goes at McDonald's. When you order some nuggets, you always count if you have the right number. And sometimes when you have by chance an extra one, you always have that good feeling. And even if you never go to McDonald's,
it could work for some other food! In reality it is nothing, but it makes you happy for a few seconds. 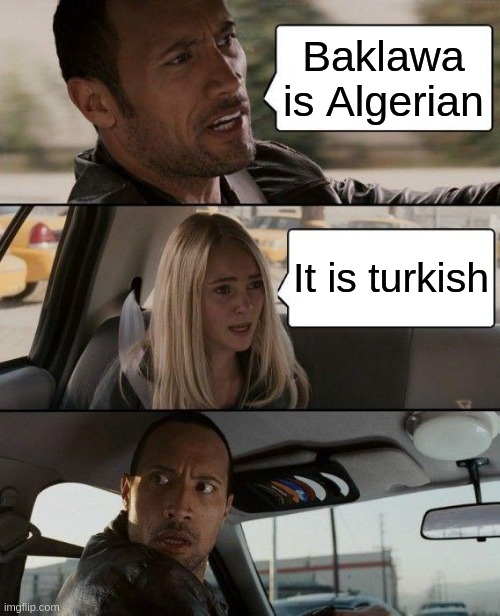 Algeria was part of the Ottoman Empire so the food that was made in Algeria was found throughout the old empire. Nowadays the Turks appropriate the dishes of others, such as kenefa from Lebanon / Syria. In this same we see a man shocked by the remarks
made by a girl saying that it is Turkish because in truth it is Algerian. 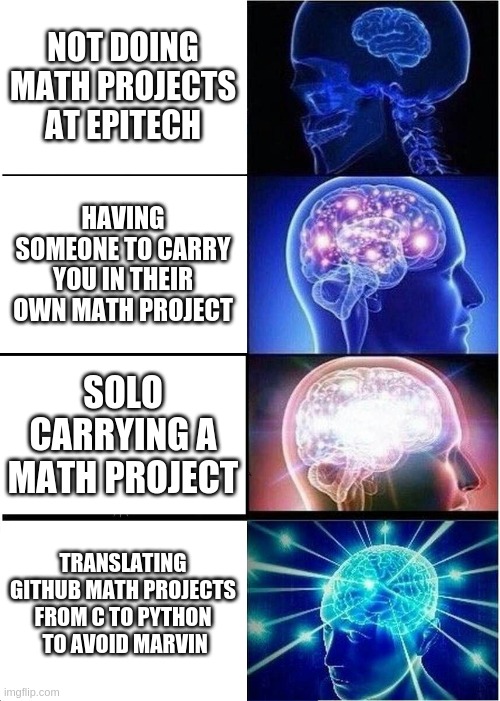 Finding the time to do maths projects at Epitech isn't always an easy thing to do. So, there are four solutions:

You could totally skip the projects, but you won't get credits.

You could sit in someone's group to let them carry you by having them working on the project.

You could be the person that works alone in the project, carrying someone.

The last one, reserved for enormous brains only, consists in finding the maths project online, in C language, and then translating the code into another programming language, like python, to avoid being flagged for cheating by Marvin, the automatic
test robot. 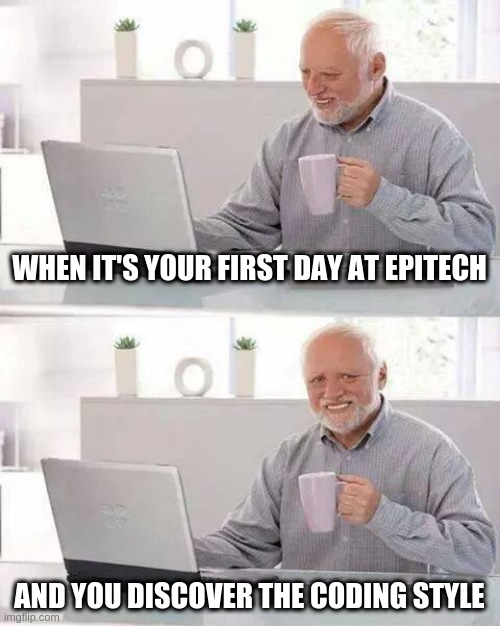 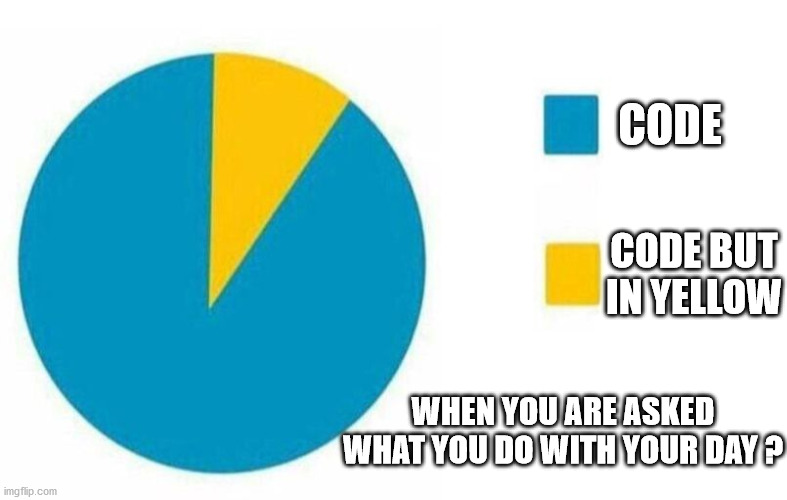 I made this meme because at Epitech you can spend at least 10 hours a day coding on a PC, if you want sucess of your years. So we think most of our time doing the same thing every day.

Very funny memes. My favorite is the 10th, simple and efficient :smile:

I like all memes (or almost)! It was difficult to choose but the 9th was so real! I think everybody knows this expression… :wink:

I think I should have written: I like all the memes (or almost)!

I am the creator of the 4th meme (Me who wants to travel) and it was a very fun experience. All the memes were interesting and they all have their place here.

I like all of these memes. But I really like the eighth one, because I’m on the second part of this meme.
I have a really nice friend to carry me on. So yes all of this memes are very funny.

I like the last one because I made the same face when I arrived to Epitech and I saw the codding style. It’s funny.

I like the last one because I made the same face when I arrived at Epitech and I saw the coding style. It’s funny

My favorite is the number 6; it is a real case when we benefit from a reduction or an offer, but I find it a little bit offset because I think this little boy didn’t have the pleasure of eating a good “macdo”!

My favorite is number 6; it is a real case when we benefit from a discount or an offer, but I find it a little bit upsetting because I think in reality this little boy can’t have the pleasure of eating a good “macdo”!